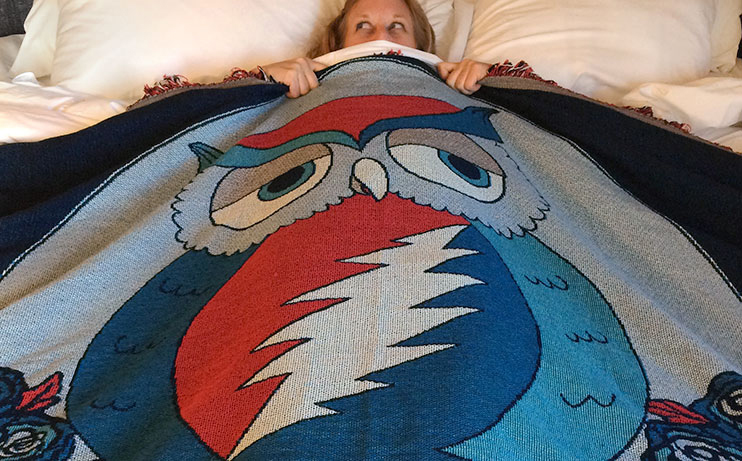 So, you ask, “Why the owl? And what’s it got to do with the Grateful Dead?

These are questions I’ve been hearing a lot. The answer is, it has a little to do with the Grateful Dead, and a lot to do with me.

The first iteration of my owl was born in the fall of 2013 while I was at home recovering from an injury that was a result of all my years on the road. I had been loading and unloading vehicles and trailers for 10 years, building a store and breaking it down over and over, driving tens of thousands of miles a year, and generally wrecking my body.

My back eventually gave out one particularly stressful week after the Gathering of the Vibes in 2013, and I ruptured the disc between my lumbar and sacrum. My left leg didn’t work quite right for an entire year after that, and I was miserable with nerve pain and the frustration of being stuck at home. My leg muscles were constantly cramped, and there were some days I couldn’t walk past the corner on which I lived.  I was isolated, and, to be totally honest, I was mad at Little Hippie for having done this to me. I questioned all the choices I had ever made, and I was afraid I would never heal.

So I asked myself to draw something else. Animals seemed like a good place to start. I thought about how animals are the first thing humans dream about, which is why children love them so much and become so attached to their plush counterparts.

I started using Pinterest to collect pictures of things I might like to draw. If you check out my personal Pinterest account, you’ll find lots of boards dedicated to animals. I have an entire board for each animal that interests me, among many other things now. You’ll notice owls are the first board I created. To draw something you need to look at it. It’s usually as simple as that. Look at anything enough, try enough times, and eventually you’ll be able to draw it.

At first my owl was just a sketch for fun and for healing. Around the same time it occurred to me that if I wanted more love in my life I should put it into my art, so I gave my owl a heart, and I drew several other animals after the owl that also had hearts drawn in to them somehow. The others are still only existent in sketch form, but they may get developed in the future.

Over the course of the following year I drew that owl everywhere. If I went out to eat with my sister and my niece, I’d draw the owl on the paper tablecloth for her to color in while we waited for our food. I went to a friend’s baby shower and I drew it on a onesie for their make-your-own onesie activity. I even broke out my old easel from high school and all the old paint I had, and I painted the owl.

An amazing thing happened: I began to heal as my owl evolved.

In the fall of 2014, as I started to feel normal again, I was spending some time in Sonoma County staying at a friend’s place deep in the Redwoods. Although the pain had finally started to subside, my legs were weak from a year of limited use. I had always been a highly active person, and being still for so long was an experience that was incredibly disorienting to me. While staying in the Redwoods I started running again. It was slow but it felt great, and I extended my runs every day as I regained my strength. I was also swimming again, the only activity I love more than art.  Meanwhile, I worked to nurture myself personally so that my spirit would recover too.

I had my owl buddy on my side. Every time I drew it, I smiled. Then, one cold November weekend when I was all alone in the Redwoods, I created the first digital version of my owl drawing, and it was there that my owl acquired its lightning bolt. I had no choice but to laugh about how no matter how hard I might try to get away from Grateful Dead art I would always end up coming back to it. More smiles.

From there, the smiles kept coming. Sometimes you just gotta find the crack through which to let them in.

I hesitated to submit the owl for licensing and to brand it forever with the lightning bolt, but I knew it had to be done.  Once that character existed, I had to share it with everyone, and I thought it was fitting for the 50th anniversary. Wise old owls and whatnot. I’m so glad now that I went through with licensing it. To say this owl brought more love in to my life would be a gross understatement. It brought SO MUCH love in to my life! In turn, I’ve loved hearing from everyone about what owls mean to them, and I so appreciate all the stories you’ve shared with me. Keep them coming!

Now almost another year later, and another Gathering of the Vibes under my belt, I have fully recovered from my agonizing injury in both body and mind. I returned to yoga after running got me back on my feet, and after many yoga classes throughout the winter and spring of 2015 I became a much stronger version of myself than I’d ever been. The process of healing was itself empowering. I learned the true path and value of personal evolution through healing, and by making my visualizations come to life, I

discovered I could recover from almost anything.

It is fitting then, that the latest version of my owl be an animated one, reminding you, of course, not to forget to breathe.

And remember, I love you!