The United Nations Development Programme (UNDP) appointed legendary musician and founding member of the Grateful Dead and Dead & Company Bob Weir as its newest Goodwill Ambassador. I was there for the ceremony which took place during the eighth annual Social Good Summit at the 92nd Street Y in New York City.

Achim Steiner, UNDP Administrator, welcomed Weir’s appointment, introducing him as someone “slightly older than those normally associated with youth,” explaining to the audience that he is “Revered across the planet by so many for his music but also for the group that became almost a cult term,” referring, of course, to the Grateful Dead.

Although the day’s event had barely kicked off, each session had already emphasized the significance of engaging youth to effect positive change, with half of the world’s population currently under 30, and that number soaring to the eightieth percentile in many developing nations.

After accepting the honor, Weir read a prepared speech, which he began by reminding the audience of the Grateful Dead’s Rainforest Benefit show at Madison Square Garden in September of 1988. The unusual closing show of an unprecedented nine show run at MSG surprised the audience with ten guest artists and four covers debuted that night and never played again.

But first Weir asked, “Why social good?” and then used his time onstage to answer that question as best he could.

“Because it feels good and it feels right,” he started, with a sentiment he’d reiterate in more detail later in the day.

He explained that the Rainforest Benefit concert served as “a call to the audience to act, and act they did.”

In the years following this concert, Deadheads “in all walks of life including businesses and media,” he noted, established a discourse that led to the slowing of rainforest destruction insisting that their politicians address the issue.

He went on to credit Deadheads at the dawn of the internet era for spotlighting businesses that either helped or hurt the rainforest, using the new technology in a way to which today we are well accustomed to make their voices matter.

Where now people increasingly require the businesses they support to be accountable, in the 80s it was normal for a business to remain silent on social matters, choosing instead to avoid risk of alienating any potential customers.

As the owner and founder of Little Hippie, a business not only licensed by the Grateful Dead but also aligned with the Grateful Dead’s ethos, I have long said that how you spend your money is your most powerful vote. Weir echoed that sentiment saying how these days young people realize the value of voting with “their actions and their transactions,” patronizing businesses that share their commitments, whether or not their governments do so, in turn creating a new “borderless democracy that serves the good of the planet.”

As a result, he said, “businesses will be able to be more agile and responsive to their customer base. At the same time consumers will be ever more investing in a sustainable future with the way they buy a product.”

He closed his speech with some optimism, pointing out how we are coming together in a way all major religions have always taught, learning that every one of our actions matter, adding that there is “nothing to stop this phenomenon from growing perhaps exponentially.” 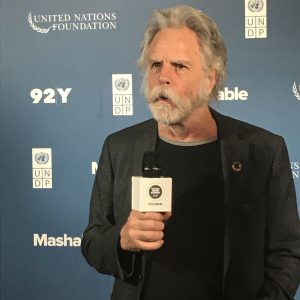 He went on to explain that the businesses who will succeed with the world’s youth population are those that will provide a sense of hope and participation in addition to their products. These are our goals here at Little Hippie, and it reminded me of a question I often ask, “What more can we do?”

Weir remarked that he was honored to be appointed the ambassadorship and that he hopes to use the position to promote this kind of awareness in business and elsewhere.

While his speech covered many topics, Weir’s priority is a focus on climate change, and this is further reflected in his comments quoted on the UNDP press release.

“I will be a strong advocate for crucial climate initiatives and renewable energy, and for the world’s oceans, coastlines and forests,” Weir said. “We all need to ensure we fight to make the planet a better one for the generations that follow us.”

After thanking Weir for his remarks, Steiner again acknowledged the significance of the community created by the Grateful Dead and said that his hope was that “The Grateful Dead family will view today as an invitation to join an ever growing number of people who recognize that climate change is not someone else’s problem.”

Though I appreciated the enthusiasm with which Steiner spoke of Deadheads, it seemed to me he had it a bit backwards. From where I’m sitting, Deadheads and the hippie generation realized years ago the value of environmentalism and the absolute necessity of protecting the world we live in so that our children may get to live here, too, and their children’s children, and so on. 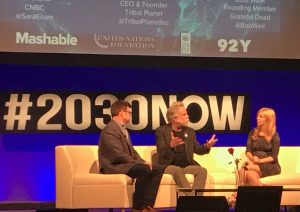 A couple hours later, Weir retook the stage, this time with Tribal Planet founder, Jeff Martin & CNBC “Squawk on the Street” co-anchor Sara Eisen who started the session by acknowledging Weir was talking about these things before others were and asking him how he was so ahead of his time.

Weir responded by referring to “Jeffersonian enlightened self-interest,” a philosophy in ethics which states that persons who act to further the interests of others (or the interests of the group or groups to which they belong), ultimately serve their own self-interest (Wiki), a realization he said he had long ago and has proceeded under ever since.

Martin, known for his pioneering work in mCommerce, spoke of the SDG Wallet his company Tribal Planet was developing set to launch November 28 in alignment with the UN & UNDP’s Sustainability Development Goals. Providing a dashboard where consumers and companies alike can track their contributions to sustainability, Eisen equated it to a Fitbit for social good.

Martin explained, “I don’t think anyone in our community has all the answers, but the entertainment industry, the UN, and corporations can come together around one thing which is that every action does matter.”

Most of their talk focused on consumers and corporations, leaving me to wonder again, “What more can we do?”

I look forward to seeing this product when it rolls out and in the meantime will be learning where small business fits into this vision and how we can integrate this tool in Little Hippie’s routine.

“If it feels good do it,” said, Weir ending that session, and no, he wasn’t referring to any kind of celebratory habits usually associated with the Grateful Dead. Though he acknowledged he was invoking “that old adage from the sixties,” he was referring here to activism, specifically the kind that will save the planet: sustainability initiatives paired with consumer consciousness. 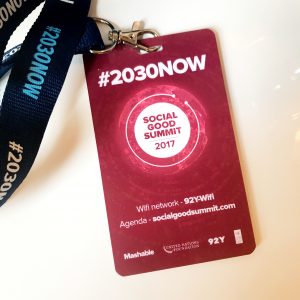 To watch Weir’s sessions in full on the livestream click here. He appears at 1:08 and again at 3:32 for about 10 minutes at each slot.