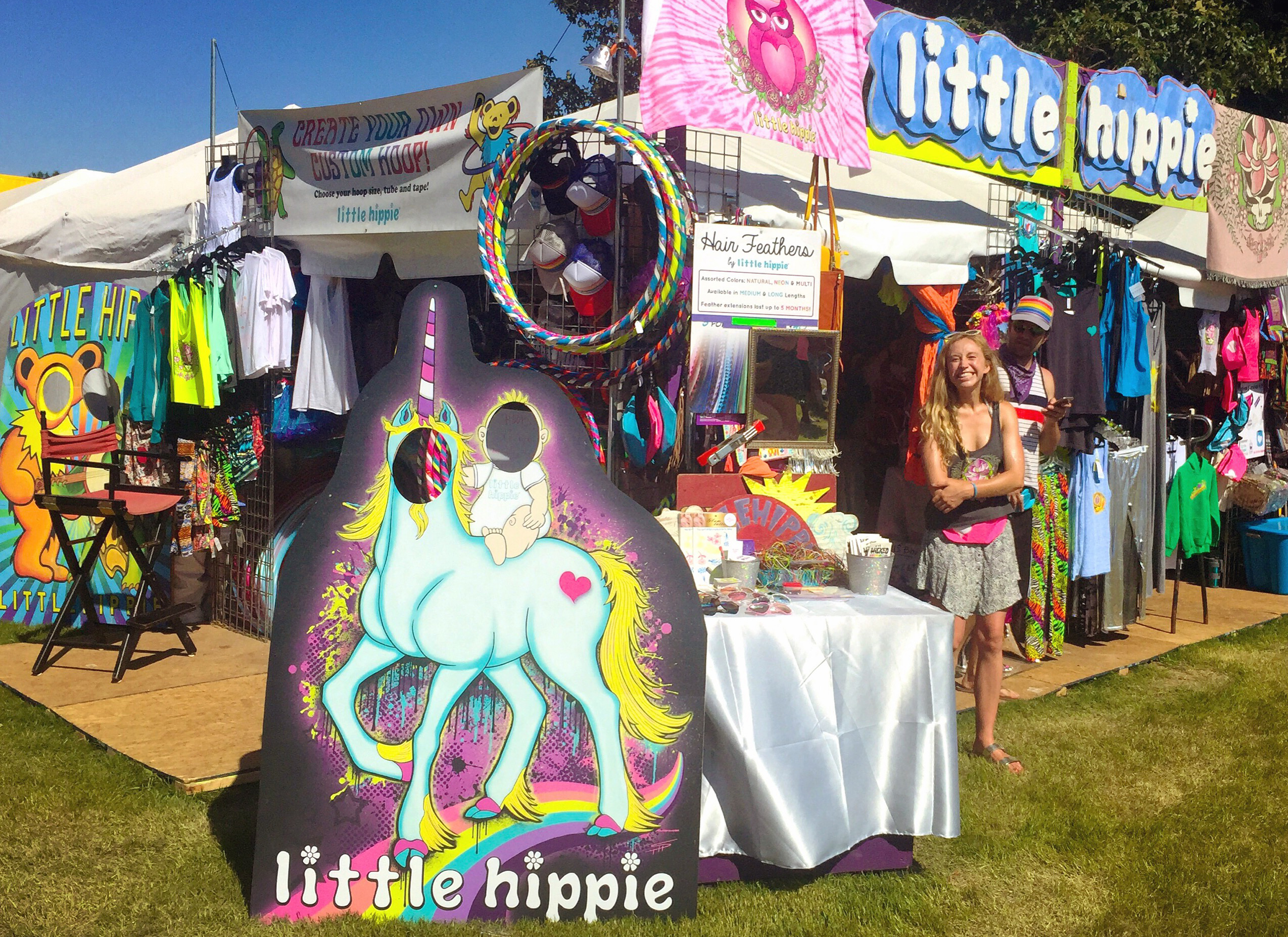 I’ll always remember the day the first Bonnaroo was announced.  It was not quite a year after I started going to festivals, and at the time a big festival was 10,000 people.  I had spent the summer prior documenting festival culture as a photographer, and of the 15 festivals I attended in 2001, almost all of them were less than 3,000 people.   Some were only a few hundred.   A bunch of them were in backyards.

Over the course of that adventure, I had gotten to know a group of people who owned a small property in West Virginia which they had named Sunshine Daydream and where they had visions of building a hippie festival paradise.  I was staying there for a bit in early 2002 with a bunch of other people, and we had started to hear rumors of a super festival in the works.  Our only context for comparison was a Phish festival.

That’s where I was when Bonnaroo was announced.  None of us believed it could be pulled off.  When each release of tickets sold out immediately over the course of the next two weeks, it blew our minds, especially because they did it without any advertising, and this was of course long before the days of social media.

I was lucky enough to get a couple tickets.  My interest in photography had evolved into making things by then, and I was in the very early days of starting a business, although I did not know it yet.  But the thing I most didn’t know was that this was an event I would attend every year for the next 15 years.

My first year at Bonnaroo was a bit chaotic and stressful.  I think everyone’s was to some extent.  Although Superfly had far surpassed anyone’s expectations, the festival was considerably more primitive than it is now, and the audience was collectively much less experienced than today’s average festival attendee.  The campground was a vast expanse of fields with little differentiation between any of them.  The pod system that now maintains order in the campground and guides people home with its large numbered balloons floating high above all the tents wouldn’t be introduced until 2004.

I spent most of Bonnaroo 2002 straddling a fence between professional goals.  I was 24 and I really wanted to be a photographer.  I had been working towards it for five years, but life was propelling me towards being a maker and although I had a press pass that year, I had also committed to selling the stuff I’d recently started making.  Time would prove the latter path was inevitable, but that week I felt pretty tortured by trying to do it all, and I don’t think I ended up doing either one particularly well.  It would turn out to be the last time I would attend a festival with a press pass.

2003 was an entirely different story.  By that time I had fully embraced life as a creator and vendor.  What had started as curiosity and a desire to explore live music culture had officially turned into a business by then.  In January 2003 I filed my business license and trademark application for Little Hippie and registered LittleHippie.com.  Bonnaroo 2003 was my first home run.  The vending scene in the campground was still completely renegade, and I and the people I was with managed to land one of the prime corners.  It was absolute chaos out there – a far cry from the official vending now in the Bonnaroo campground.  It was also one of the most exciting (and exhausting) experiences of my life.  I sold so much stuff so fast that week, and it did wonders to cement the foundation of my fledgling business.

In 2004 Little Hippie and I made the move to Centeroo.  I had signed my Grateful Dead license at the beginning of 2004, and a friend I made as a result (still great friends) referred me to Bonnaroo’s vendor coordinator, helping me to secure an official spot near the mushroom fountain where I have been ever since.

My first Centeroo booth was very small.  There was no back to it, so I had nowhere to store stuff and nowhere to take a break from the crowd. People walked straight through it, and by Sunday the relentless rain that plagued that year’s Bonnaroo had turned my booth to a river.  My friend Chris at Nomadic State of Mind, who has been my Bonnaroo neighbor since that year, and I acted fast that Sunday morning and built a dam around our little island of booths from a pile of discarded fencing and old paint cans we found nearby.  People were able to walk on the fencing to get in to our booths, and we managed to have a great day (Later that summer we would have to do the same thing at Phish’s mud beleaguered Coventry).  Then we broke everything down that night and drove to Telluride for the Bluegress Fest.  We were crazy.  I never attempted to leave Bonnaroo on Sunday night again.

From there the rest of the years are a bit of a blur.  If I look at pictures of my booth or old copies of the lineup, I can distinguish memories, but all together it’s more like an arc of life.

Just like there are good days and bad days in life, I’ve had good Bonnaroos and bad Bonnaroos.  Bonnaroo doesn’t pause the normal rhythms of life.  Major life events still happen while I’m there.  Joys, tragedies and the mundane.  My mother’s birthday is usually while I’m trying to get out the door and Father’s Day is something I’ve come to associate with phone calls from behind my booth on Sunday every year at Bonnaroo.  My sister had to move her wedding up a week, so I wouldn’t have to miss Bonnaroo in 2006.  One year I had a team member sustain a life changing Spinal Cord injury while I was at Bonnaroo, and other friends have died.  Babies have been born.  Life has marched on, whether I’m in Tennessee or not, and Manchester has become just another place I exist sometimes.

Bonnaroo is so much to me.  Summer camp was my favorite part of growing up, and Bonnaroo is my adult summer camp.  Not only do I love the experience of reuniting with friends and finding adventure together, but it also became a professional milestone. I do most of my design work in the quiet months of winter, and Bonnaroo gives me a deadline every spring by which time I need to finish everything I’ve been working on.  It has always been the largest audience I have access to all year, and it is an excellent opportunity to showcase my latest designs and to get feedback on ideas.  As a business owner, it is difficult to imagine a better setting for fast paced market research and exposure.  Every year I go home with a very clear idea of what the kids are into these days.  I also go home with a few new favorite bands, some new friends and a really good tan.  It’s an absurd amount of work, and I often wonder if I’m nuts to keep doing it, but the truth is come early June every year, there’s no place I’d rather be.

Being in the photo pit at the front of the main stage in 2002 when DJ Logic played Dust in the Wind while the crowd waited for the closing headliner to take the stage. He conducted everyone to illuminate the crowd with glowsticks and lighters (no cellphones yet), and then he had everyone extinguish them all at once. That moment is burned in my brain.

Setting up shop at the main intersection of the campground in 2003 before the festival started regulating vending in the campground.

Going on a date with a headliner to the Disco Arcade in 2004.

Dancing barefoot in the sun to Xavier Rudd in 2005.

Walking through the campground at sunrise with a bestie on Sunday morning in 2006 and not caring that we had to open the shop again in a couple hours.

Watching Brian McGregor paint the fountain in all checkers while we set up our booth in 2007. He was so in to it that had checkered himself too. Even his beard was perfectly checkered, as was the mop he was using to keep the fountain dry.

Having my booth moved to the corner it’s been on ever since in 2008.

Seeing Trey Anastasio rip it up with his childhood idol when Bruce Springsteen sat in with Phish in 2009.

Taking an all girls crew in 2010 and totally crushing it with them.

Watching Eminem at the main stage from a friend’s shoulders in 2011.

Discovering D’Angelo when he made his return to music in the 2012 Superjam.

Surprising one of the girls working for me with a chocolate bacon birthday cake midweek in 2013.

Being entertained all week by two of the funniest people I’ve ever brought to work in 2014.

Having my mind blown by Lee Jeffries hooping in front of the Little Hippie booth when he came by and played with a bunch of our hoops in 2015.